Impatient? — then you're the time waster 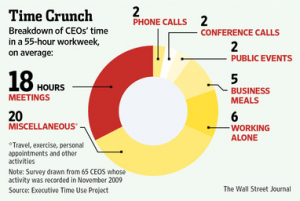 What you do to become a time waster

Are you the time waster?

“I’m too impatient! I don’t have time for this. I have a big decision to make. The problem is that my key staff argues with me and each other and simply doesn’t do what I want.”
Jason runs a small manufacturing shop. He is facing some big decisions like all business owners. He stresses about the decisions every day and worries constantly.
He has turned himself into a time waster.

“I’m so upset with the decisions these people make I can’t believe they don’t see it.”
Jason was clearly upset, getting louder as he spoke. The repetitive escalating stream of consciousness about the situation lasted about 20 minutes.
I was waiting for an opening, I knew one would come eventually.
I started a new tact and simply said “uh huh” and “I hear you” a few times slowly and calmly.
At the first opening, I asked a question as slowly and calmly as I could muster.
“What are the concerns?” I asked, thinking the more wound he get the more of time waster he becomes.
Jason started to slow down. He still repeated his frustration but that was okay. He was starting to listen to himself and my questions.
Jason immediately launched, again, into all his fears about possible outcomes that haven’t happened yet.
“Let’s separate the concerns from the fears,” I continued. “Fears are emotional and get you, and others, wound up.”
“In fact if you want to create arguments and delayed projects do these three things:

Jason looked up surprised, “I definitely don’t want to aggravate the situation,” he said calmly.
Jason started to calmly recount his concerns one at a time. “I am concerned the team is not paying attention to details of each job set up. I don’t believe they know the process well enough. And they aren’t looking for ways to streamline the time from set up start to finish.”
It was dawning on me that Jason was really talking about values that were so important to him that when his staff stomped on these values he went ballistic. Jason had not taken the time to work out exactly what his values were, let alone express these most important values to his team in calm, methodical manner.
The values revolved around detail orientation, optimization, mastering a process to the point you can change it to further optimize the flow.
His job now was to clearly articulate his values in as many ways as there are conversations in the day with his crew, simply, articulately and often.
Understanding values is foundational planning work. Communicating them often builds a solid foundation from which to build all kinds of plans and activities.
As Jason’s self understanding grew and skills in foundational planning work improved Jason the time waster
Jason’s staff started to appreciate just how important these are to Jason once he got the emotional distress out of the conversations. Interestingly, Jason’s impatience was replaced with a sense of urgency which flowed to his team. This took time and patience.
Without a strong foundation of values you’re the time waster. This is where the crazy in crazy busy comes from.
What values can you point to that are so deeply held and you won’t bend on them no matter the cost?